[This is a Facebook post in a thread initiated by Alexander Hernández, of the Metro Atlanta DSA,  asking people to support his democratic right to have a resolution saying defeating Trump and Trumpism should be the overriding priority for the our DSA chapter discussed and voted on at our next DSA meeting. 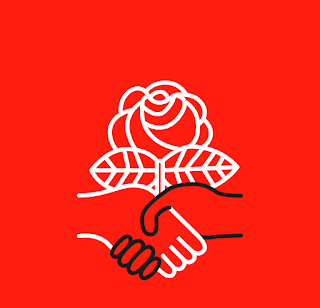 [Catie L, of the current executive committee responded that Alexander had had lots of chances to make his resolution more to the liking of our chapter nomenklatura, and (in true beaner/greaser style) Alexander refused to.

[Thus, Katie avers, "The EC isn't blocking anything; they voted to move forward with the voting & resolution committee's recommendation that it not be included on the agenda because it was improper."

[Got that? The EC --executive committee-- "isn't blocking anything" on account of it "moved forward" with the censorship committee (I mean "voting and resolutions committee") recommendation that it not be included in the agenda because it was "improper."

[And the difference between this and what Alexander describes as blocking is ... nothing. nada. zero. zip. Catie says they're not "blocking" his resolution from coming up for a vote. They're merely saying it can't be "included on the agenda because it was improper."

[WHY? Katie explains it in great detail: "As much as I am loathe to recommend folks read 50+ Slack threads, hopping on our chapter Slack and reading the discussion surrounding this will really illuminate the reality of the situation". It sure does. Telling people to go to an internal DSA forum structured in a way that only office workers and professionals have experience with tells me everything I need to know.

[If this were only the first, the second, or the hundredth such incident befell on spics like Alexander or me on the Anglo left in the United States, I might overlook it.

[But as it happens, I'm now headed towards my 70th birthday and after more than a half century of this bullshit, I've had enough. For more details, read through to the end to see what happened to the (supposedly) most widely supported resolution at the last DSA convention, and why I say not just #DSASoWhite but #DSAEnglishOnly.]

Catie, You may be " loathe to recommend folks read 50+ Slack threads," but you can recommend it until you're blue in the face.

I'm not going to discuss this on that corporate abomination Slack. PUBLISH the entire debate in a public space like a blog or a medium message. Maybe I'll read it, but the way I'm feeling right now, I doubt it.

Oh, but it reflects badly on the DSA to air our dirty laundry in public. So fucking be it.

It reflects WORSE on the DSA that you as a member of the local exec say let's go back to the Stalinist cult of secret "internal discussions," only this time through the corporate management control tool Slack.

"Internal" discussions. Been there. Done that. Not doing it any more.

A socialist organization, if it is truly socialist, does not belong to itself or its members. Socialism is the expression of the working class as it has emerged and developed under capitalism. If it were true to its socialist name the DSA and all of us as members would understand INSTINCTIVELY that all DSA business belongs to OUR CLASS, our people, the working people.

We as socialists should be trying to fashion a movement that helps working people come to a point where "they" (we) free ourselves. We do not want condescending saviors to rule us from a judgement hall.

Lenin and his friends, enemies and rivals in the Russian Social Democratic Labor Party NEVER had secret written discussions in private bulletins and publications and it speaks to how profoundly Stalinism (including Trotskyism, which is just the mildest, most equivocal manifestation of Stalinism) completely corrupted the socialist movement in the imperialist countries since the early 1920s.

As for that august body, "The voting & resolutions committee" of Atlanta DSA having given an uppity spic like Alexander a chance to make his resolution more to the liking of some people by providing "options to amend and/or clarify the resolution," f*** them.

ALL I see here is the same thing I've experienced in the white-dominated U.S. socialist movement for half a century. we spics don't follow the rules, we spics are wrong.

I think this is just one more more item in a mountain of evidence that it is not possible to build a real multi-national (multi-ethnic/multi-racial) socialist movement in the United States.

A year ago at the time of the last DSA convention I wrote a resolution which was the resolution that got the most votes of any proposal at the convention. It instructed the incoming National Political Committee of the DSA to orient to the Latinx communities beginning by creating an editorial board to run a Spanish-language web site in the 90 days following the convention. It was specifically approved and sponsored by the Metro atlanta DSA chapter. No-One, here or elsewhere, said word one against it.

The ONLY suggestion was from the comrades of the Socialist Majority caucus who suggested that to take into account complications and unforeseen circumstances, "if possible" (or words to that effect) be added to the 90-day goal.

A year later we are in the middle of a crisis which needs to be recognized as a proletarian pandemic, to a very large degree, meaning, one centered in the industrial working class, people in Amazon warehouses, PPP textile mills, meat processing plants, fruit packing sheds and canneries. Those are major centers of Coronavirus spread, alongside nursing homes and prisons.

The result is that Latinx folks are a little over one sixth of the population but one third of the Covid cases. And when you get down to prime working age populations 20-50, there are more Latinos who've tested positive than the majority nationality, Anglos ("non-Hispanic white"), never mind Blacks, and when you get to schoolchildren, ages 5-17, Latinos are the ABSOLUTE MAJORITY of those who have tested positive for the virus.

There is nothing that could have been more timely, more righteous or more revolutionary than the American socialist movement reaching out to the Spanish-dominant immigrant core of the Latino community. THat is EXACTLY what simply implementing the convention resolution would have led to. That is EXACTLY what the DSA's national leadership refuses to do, even now, months into the pandemic.

But back to Atlanta. If the Metro Atlanta DSA leadership can find the time to figure out the ways to prevent a spic like Alexander from presenting and having his resolution voted on, then my question is:

WHY, in the middle of a pandemic centered in the Latino proletariat haven't you found the time to write a resolution demanding that all members of the National Political Committee resign for having failed to even fake a gesture to implement the MOST supported resolution adopted by the last convention, the one that ORDERED the incoming NPC to orient the DSA to reach out precisely to this layer of the population?

Or what about a resolution calling for a national dues strike against national DSA until and unless the NPC actually OBEYS the MANDATE of the resolution that had the greatest support at the last convention?

Why don't I write it such a resolution, and propose it to the Metro Atlanta DSA?
BECAUSE that is exactly what I did last year, and I remember writing then how tired I was of having to do this, of bearing the burden of the white man's racism, how I wished that for once I didn't need to be the one to tell the biggest socialist group in the country that in a world where their country had the second-largest Spanish-speaking population in the entire fucking world, they couldn't be English-only.

So, sure. A spic like Alexander couldn't bring himself to follow all the rules and accommodate the resolutions committee and HOW DARE HE complain to working people in general instead of keeping it "inside" the socialist family.

And the along came a once-in-a-century pandemic that shows WHY orienting to the most oppressed and exploited layers of the working class is absolutely essential but never mind, we're so full of our "collective power" and "rank and file" strategies that we don't notice that the single most affected sector of the working people don't hear a word the DSA says because the DSA won't speak in a language they understand.